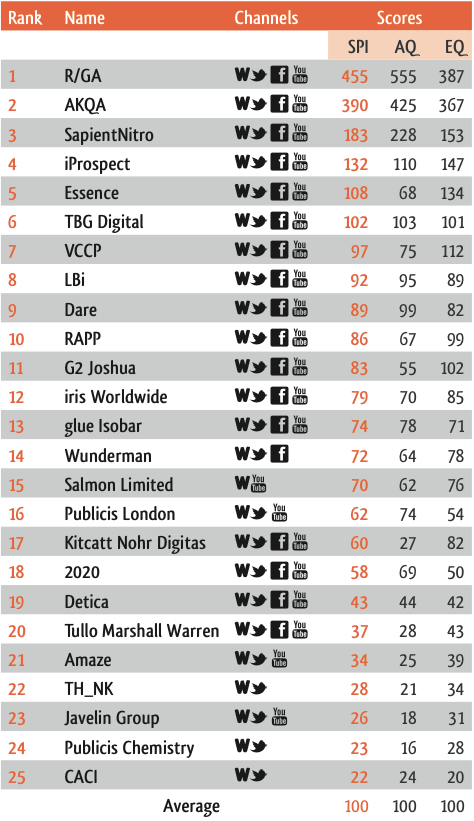 Some say that in order to credibly advise others about social media, marketing agencies need to be participating first hand. So this week, the Sociagility Social Performance Index looks at the social media performance of 25 leading digital agencies. We’ve compared them all to see which ones are using social media best to engage and interact.

Our findings show that The Interpublic Group’s R/GA tops the social charts with the strongest awareness and engagement scores and an SPI of 455 against the average of 100, driven primarily by its Twitter account. WPP’s AKQA takes second place, with the highest popularity, interaction and trust scores according to our methodology. An honourable mention goes to independent agency Essence, Chime’s VCCP and WPP’s G2 Joshua who deliver above average engagement scores, despite lower than average levels of awareness..

Just six of the 25 agencies included in this study recorded a Social Performance Index (SPI) score above the average, with overall leaders R/GA and AKQA outperforming the rest of the group by a considerable margin. Other leaders include SapientNitro, iProspect and TBG Digital.

Awareness Quotient (AQ) and Engagement Quotient (EQ) scores show that whilst many of these agencies appear to be demonstrating an ability to build popularity, they are less successful when it comes to interacting and engaging with their communities. Only Essence, G2 Joshua and Kitcatt Nohr Digitas show a delta sufficient to suggest that they are punching well above their weight.

Considering the services these agencies provide, one particular surprise is that only two-thirds appear to be using all of the most popular social media channels (with fewer still providing visible links from their home pages).

At the bottom of the table, a number of agencies clearly have some way to go in order to compete effectively with the leaders.

What do you think – are the agencies best at being social always the best at doing social for their clients?